as some you may know we have had a vinyl toy in the
pipeline for the last 2 years or so. the whole project was
pretty much stopped in its tracks last year when the toy's
prototypes where stolen from toy2r in hong kong.
since then i have designed a new toy that will be coming
out with another hong kong company called red magic.
the toy will be part of a series called "love original project",
which has a rather ambitious 30 artists contributing.

the toy prototype was shown at the recent taipei toy festival,
the prototype still needs some work but i am really exited about
seeing the final toy. i should hopefully have pictures of the final
version next week so i will post them then. till then here is a
rather doggy photo of the toy ( this is not the final pose ;)
cheers
dyl 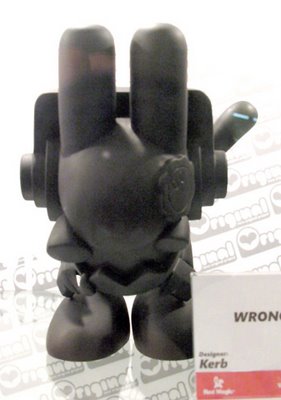